The Electric Network Frequency (ENF) is the frequency of power distribution networks in power grids; it is nominally 60Hz in North America and 50Hz in most other places. The ENF does not stay at this nominal value, but fluctuates around it due to changing loads in the power grid. What makes the ENF useful for forensic purposes is that it can be captured by audio or video recordings due to electromagnetic influences.

Thje figure above is an example of ENF embedded in media recordings. We can see three spectrograms of recordings made simultaneously in India, where the nominal ENF value is 50Hz. The ENF component appears around 50Hz in the power recording, and the same component appears around 50Hz in the audio recording. In the video recording, similar ENF variations appear, yet at around 10Hz. This is due to aliasing as video recordings are made at rates close to 30fps, which would cause aliasing when trying to capture a component at 50Hz or 60Hz. For more information on Seeing the ENF, please refer to Journal Publication #2 and Conference Publications #1 and #11.

Below, find a PDF poster giving an overview of exploring the ENF for information forensics: 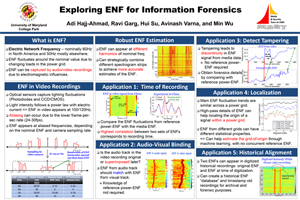 The ENF can be extracted using a variety of frequency estimation methods, including non-parametric spectrogram-based approaches or parametric subspace-based approaches (such as MUSIC and ESPRIT). We can also make use of the fact that the ENF can appear strongly at the harmonics of the nominal frequency, and combine the different instances observed of ENF variations to achieve more robust estimates. The figure below shows a spectrogram where the ENF appears strongly at the even harmonics of 60Hz in an audio recording. For more information on our Spectrum Combining Approach please refer to Journal Publication #3 below.

Applications of the ENF

There can be several applications of the ENF as a forensic tool, some of which we are listing here:

Note that power signals are easy to collect. An example of how to do so would be the circuit shown below, which can be plugged into any electrical wall outlet and records the power signal using the battery-power audio recorder. The ENF can be extracted later from the recording. 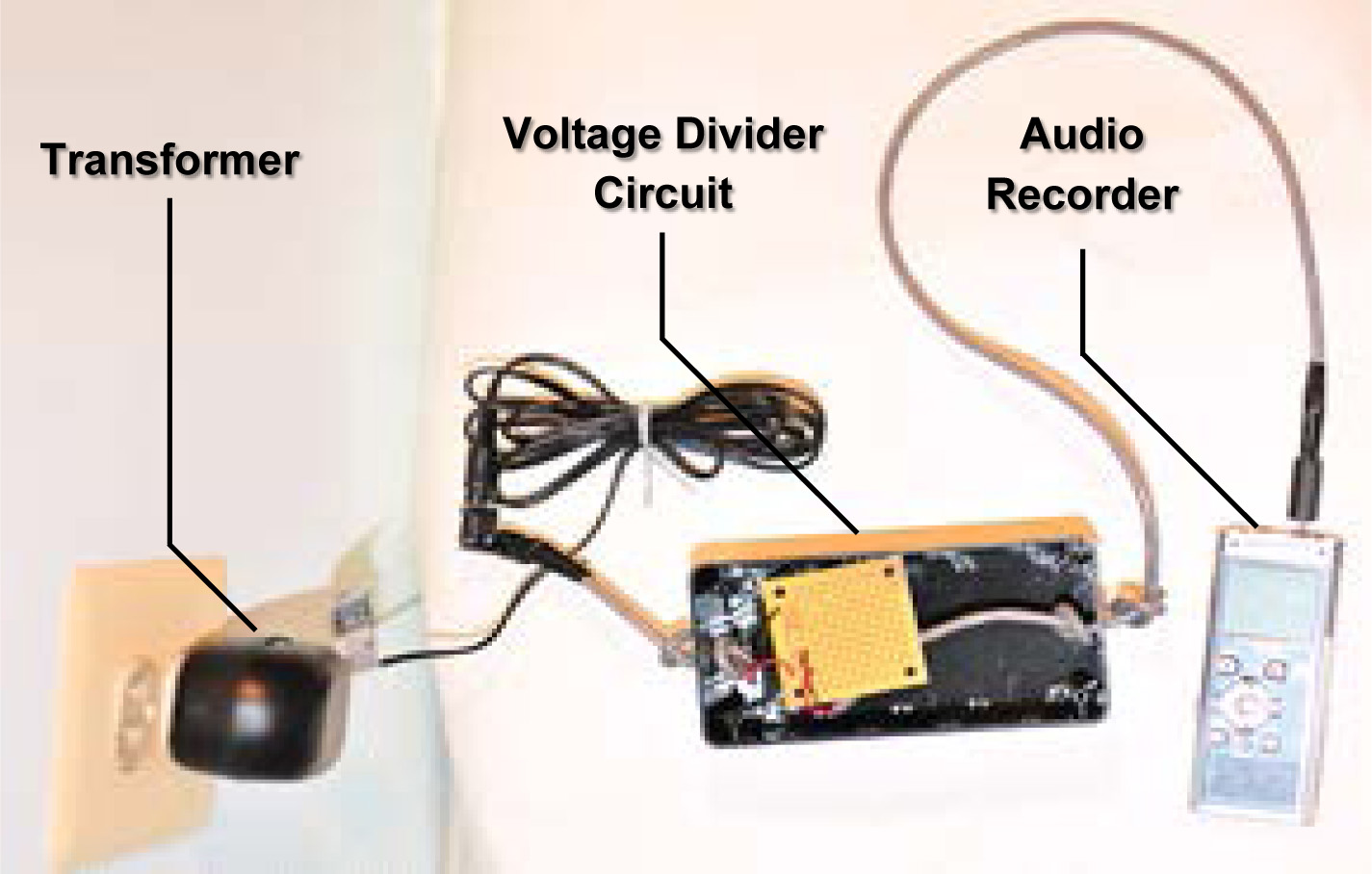 Is the audio track in the video recording original? Or was it superimposed later? We can extract the ENF signal from the audio track of a video, and then extract it again from the pixels and compare the two signals. If they do not match, then we have reason to doubt that the media file was altered. Note that we do not need reference power ENF signals in this application.

Tampering in media files, such as the addition, modification or deletion of a clip, leads to discontinuity in the ENF signal extracted from the media file. We can obtain forensic details by comparing such a suspicious ENF signal to a reference ENF signal. The figure below shows an example of this. 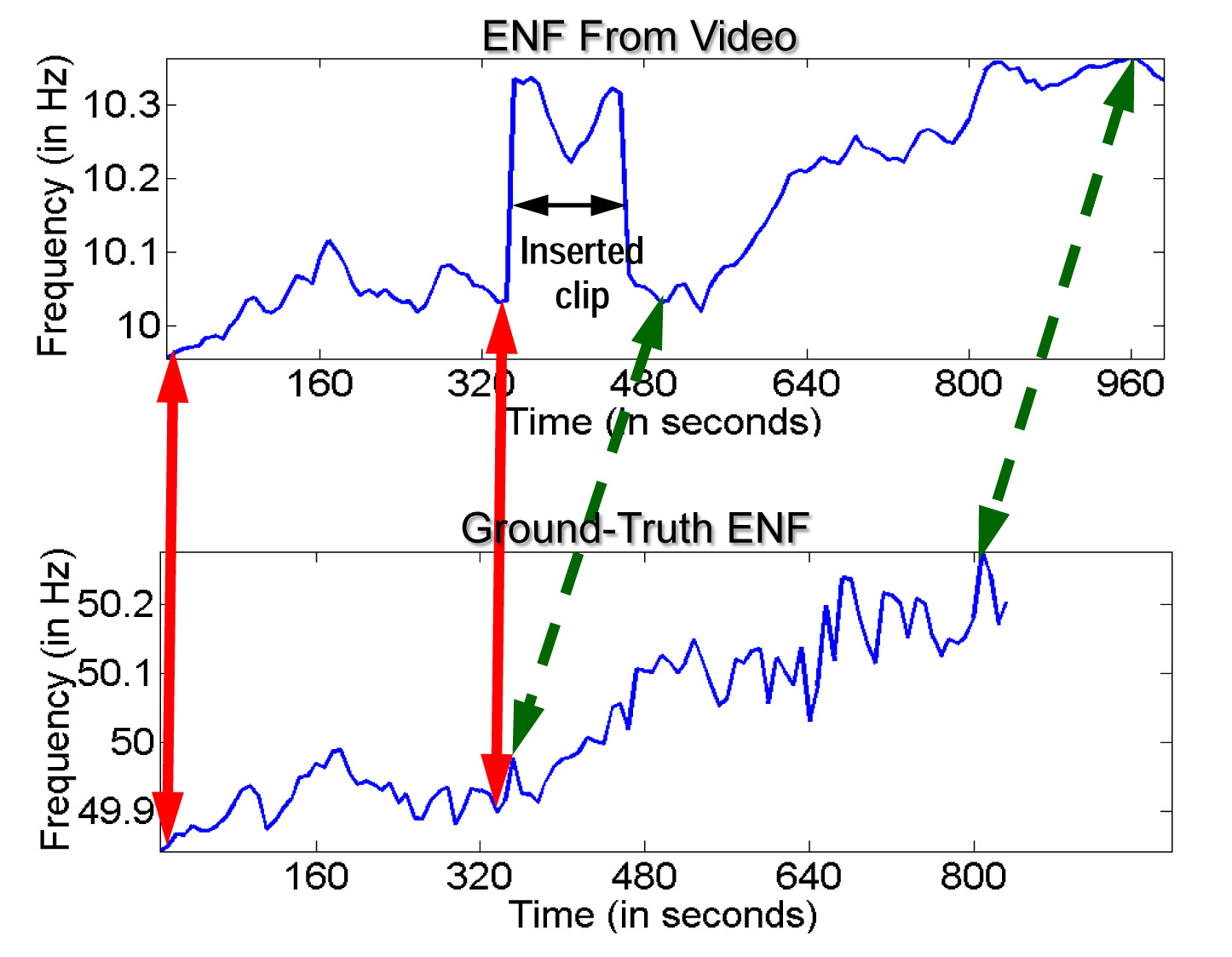 Localization of media signals within a power grid

Main ENF fluctuation trends are similar across a power grid, yet high-pass details of ENF signals can help locate the origin of a signal within a power grid. The figure below shows the correlation between high-passed ENF signals from different locations in the East US grid. The correlation is higher when the two locations are closer and lower when they are farther apart. For more information on Geo-Location Estimation using ENF, please refer to Conference Publications #4 and #6 below . 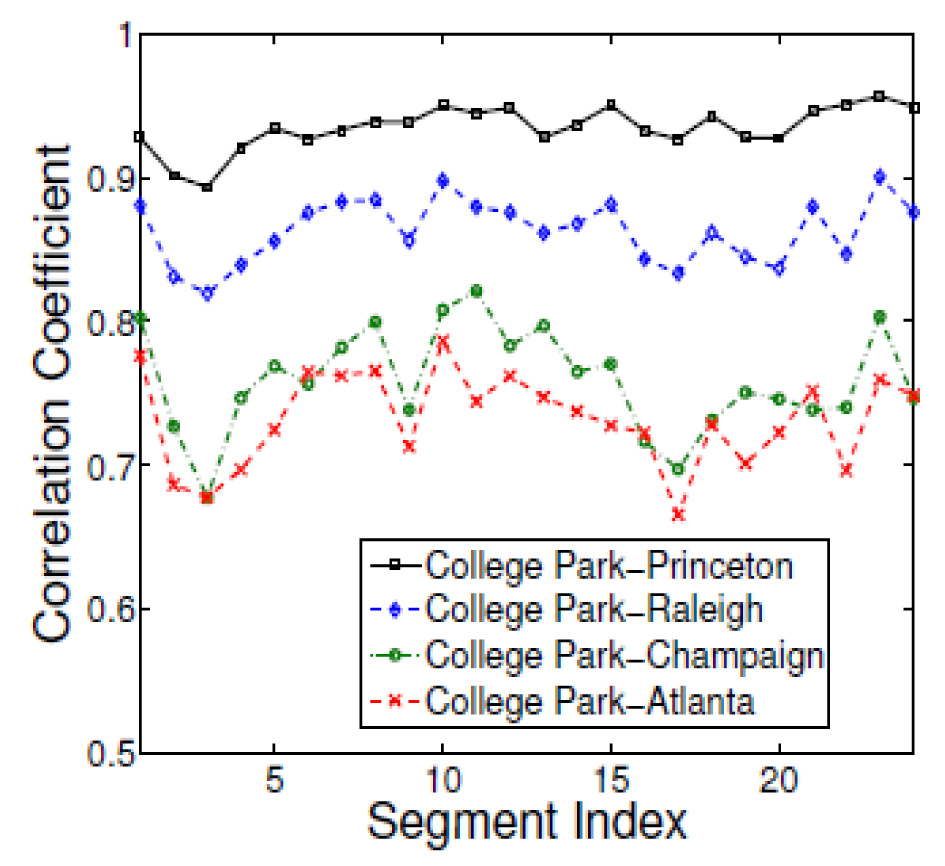 Localization of media signal among grids

ENF signals from different power grids can exhibit different statistical properties. An example of this is shown in the figure below, where we have sample ENF signals from China, India and Lebanon. Even though all these ENF signals have a nominal value of 50Hz, the variations they show are distinct from one another.

This can help us estimate the grid-of-origin of a media signal using its ENF through machine learning, without the need of concurrent ENF references. For more information on Inter-Grid Location Estimation using the ENF, please refer to Conference Publication #7. 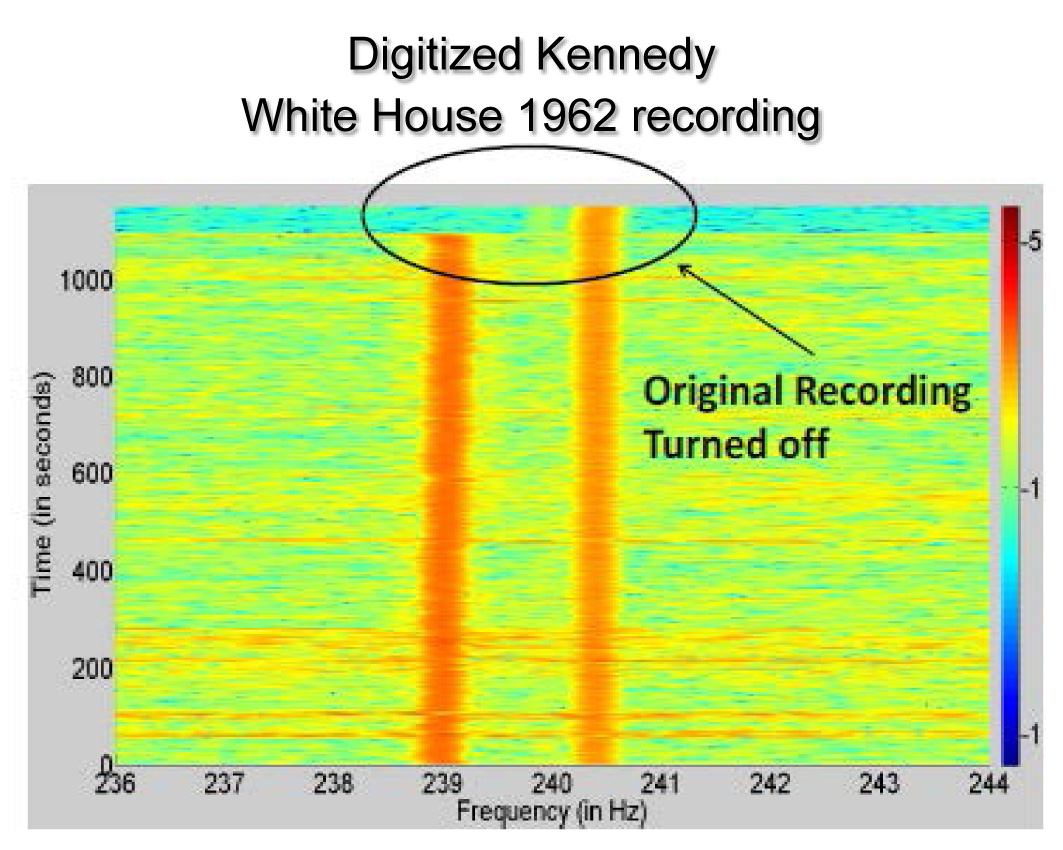 Using such observations, we can create a historical ENF “database” to timestamp old recordings for archival and forensic purposes. For more information, please refer to Conference Publications #5, #9 and #10.

ENF can be used to synchronize different media files that were recorded over overlapping durations of time. A toy example of such media files is the set of snapshots shown below taken from two different video recording the same racquetball game. For more information on the usage of ENF for Multimedia Synchronization, please refer to Conference Publications #8 and #12. 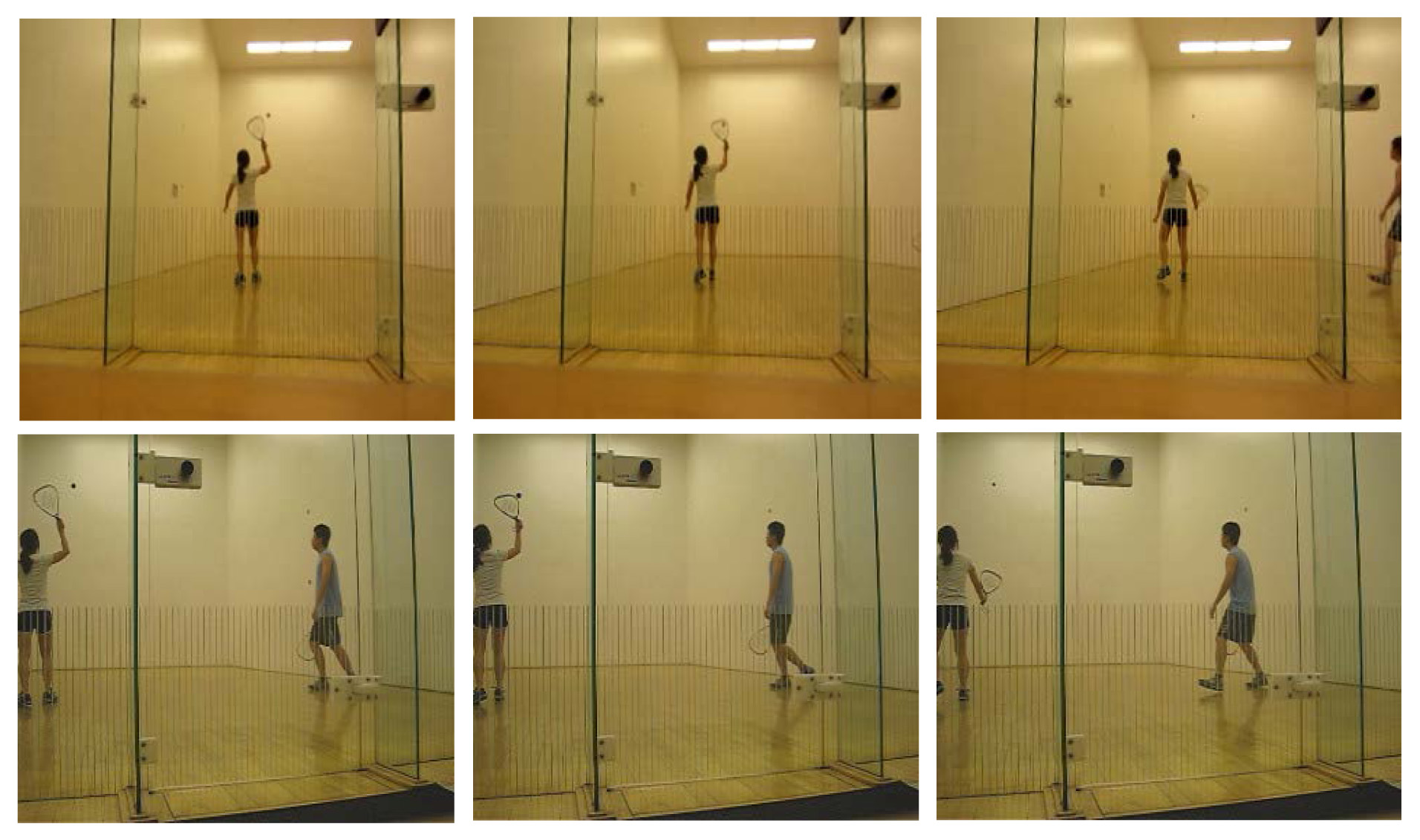